The Voice of Nurses: a Qualitative  Study of the History of Nursing in  Kazakhstan during 1960–1990 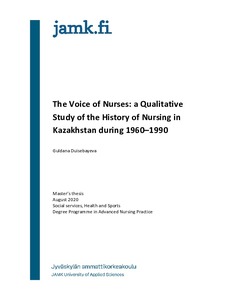 Duisebayeva, Guldana
All rights reserved. This publication is copyrighted. You may download, display and print it for Your own personal use. Commercial use is prohibited.
Näytä kaikki kuvailutiedot
Julkaisun pysyvä osoite on
http://urn.fi/URN:NBN:fi:amk-2020083019961

Background: Historical research in the field of nursing is a valuable approach in broadening  the understanding of nursing discipline to determine its place in history and future  direction. In 2014, with the approval of the acting Minister of Health of the Republic of  Kazakhstan, the country adopted a "Comprehensive plan for the development of nursing in  the Republic of Kazakhstan until 2020". By implementing this plan, the history of nursing  and historical research can become one of the most important areas of nursing science in  Kazakhstan.  Aims: To describe the history of nursing in Kazakhstan in 1960–1990: what was nursing  and nursing education like and the relationship between nurses and patients/their  relatives in that era as described by nurses.  Methods: A qualitative study was conducted, for which 10 nurses who worked in  Kazakhstan in the period 1960–1990 were found to complete a survey using the snowball  sampling method. The interviews were analyzed using content analysis.   Results: The data revealed that nursing was a prestigious profession, and parents and their  children were happy to choose it. Nursing was a socially significant specialty. In  Kazakhstan, nurses in college were taught by doctors. However, during the study it was  revealed that during the practical training, nurses were mentored by senior nurses who  trained and showed them nursing care. The fact that nurses did not teach in college was  because there was no higher education for nurses in the country, and therefore, nurses  could not teach in college.   Conclusion: The research led to the conclusion that Kazakh nurses wanted to continue  their training. Among them were leaders and activists who were more than willing to try to  improve nursing. The lack of provision of opportunities for nurses to continue their studies  in higher education institutions led to a shortage of staff, a burden on nurses, and a delay  in the development of nursing. Given that the history of nursing in Kazakhstan is little  studied, the results of this study may serve as the beginning of further historical research  of Kazakh nurses in more narrow areas.