Viability Of a Radiative Collector and Emitter Device 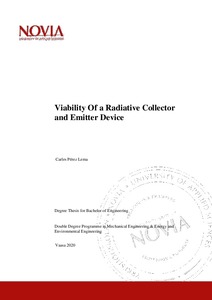 Perez Lema, Carles
All rights reserved. This publication is copyrighted. You may download, display and print it for Your own personal use. Commercial use is prohibited.
Näytä kaikki kuvailutiedot
Julkaisun pysyvä osoite on
http://urn.fi/URN:NBN:fi:amk-2020092220639

The Radiative Collector and Emitter (RCE) device is a new technology that is being developed by the research group SEMB from the University of Lleida. This device could be an alternative way to produce Domestic House Water and cold water for all kind of buildings.

In the first part of the thesis, the principles and the functionality of the RCE are explained with respect to solar collecting and the radiative cooling phenomenon. In addition, background information relating to the RCE technology are developed and discussed.

The findings indicate that for cooling purposes, the power of the RCE device in front of the systems using photovoltaic panels is not high enough (maximum power of 29,29 W/m2) to be a renewable alternative. However, for heating purposes, the RCE is a capable technology (maximum power of 69,13 W/m2) and therefore, as a unique device that can satisfy both demands, cooling and heating, the RCE device could be a considered viable technology to produce DHW and cold water cleanly and sustainably.