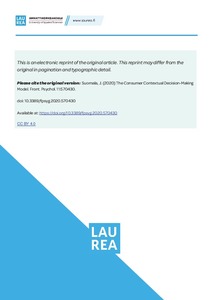 Consumers can have difficulty expressing their buying intentions on an explicit level. The most common explanation for this intention-action gap is that consumers have many cognitive biases that interfere with rational decision-making. The current resource-rational approach to understanding human cognition, however, suggests that brain environment interactions lead consumers to minimize the expenditure of cognitive energy according to the principle of Occam’s Razor. This means that the consumer seeks as simple of a solution as possible for a problem requiring decision-making. In addition, this resourcerational approach to decision-making emphasizes the role of inductive inference and Bayesian reasoning. Together, the principle of Occam’s Razor, inductive inference, and Bayesian reasoning illuminate the dynamic human-environment relationship. This paper analyzes these concepts from a contextual perspective and introduces the Consumer Contextual Decision-Making Model (CCDMM). Based on the CCDMM, two hypothetical strategies of consumer decision-making will be presented. First, the SIMilarity-Strategy (SIMS) is one in which most of a consumer’s decisions in a real-life context are based on prior beliefs about the role of a commodities specific to real-life situation being encountered. Because beliefs are based on previous experiences, consumers are already aware of the most likely consequences of their actions. At the same time, they do not waste time on developing contingencies for what, based on previous experience, is unlikely to happen. Second, the What-is-Out-there-in-the-World-Strategy (WOWS) is one in which prior beliefs do not work in a real-life situation, requiring consumers to update their beliefs. The principle argument being made is that most experimental consumer research describes decisionmaking based on the WOWS, when participants cannot apply their previous knowledge and situation-based strategy to problems. The article analyzes sensory and cognitive biases described by behavioral economists from a CCDMM perspective, followed by a description and explanation of the typical intention-action gap based on the model. Prior to a section dedicated to discussion, the neuroeconomic approach will be described along with the valuation network of the brain, which has evolved to solve problems that the human has previously encountered in an information-rich environment. The principles of brain function will also be compared to CCDMM. Finally, different approaches and the future direction of consumer research from a contextual point of view will be presented.