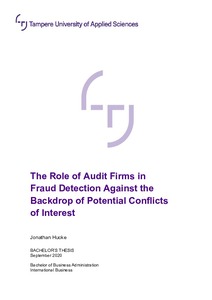 Hucke, Jonathan
All rights reserved. This publication is copyrighted. You may download, display and print it for Your own personal use. Commercial use is prohibited.
Näytä kaikki kuvailutiedot
Julkaisun pysyvä osoite on
https://urn.fi/URN:NBN:fi:amk-2020093020840

Most of the financial and economic crises in recent history have not just had major negative implications on the economic situation of industrial and developing countries and their peoples but have also been accompanied by spectacular corporate collapses and bankruptcies. Two of the most prominent victims are former telecommunications firm WorldCom and the investment bank Lehman Brothers. WorldCom went bankrupt during the burst of the tech bubble in 2002, and Lehman collapsed at the height of the financial crisis in 2008. What both companies had in common were their contentious accounting practices and the failure of their respective auditors who neither detected WorldCom's accounting fraud nor reported Lehman's accounting gimmick. Both auditors, Arthur Andersen and Ernst & Young, faced heavy criticism in the wake of the collapses; and the auditing profession in general has been under close scrutiny ever since.

This research aims to examine the role of audit firms in general but also specifically in fraud detection, especially against the backdrop of potential conflicts of interest these audit firms might face during their work. The purpose was to develop solutions which, if implemented, can eliminate conflicts of interest in audit and improve audit quality. The data were collected by using a mixed-method approach which incorporates both qualitative and quantitative data. When it comes to market research methods, secondary data was gathered from reliable and renowned sources.

The research results show that audit firms occupy a crucial role in the world economy since companies rely on their work in order to conduct their business operations efficiently. Moreover, the failure of audit firms can have devastating effects for themselves, their clients, and their clients' stakeholders. The research also suggests that audit firms can get entangled in numerous different conflicts of interest that can arise from various controversial constellations.