Resilience during a temporary lay-off: Finnair cabin crew and the COVID-19 pandemic 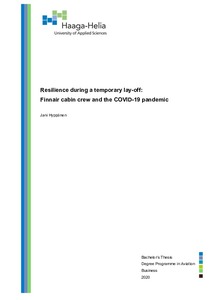 During COVID-19 pandemic Finnair Plc temporarily laid-off all cabin crew members for at least three months. A temporary lay-off means halting both work and salary, which has an impact on both the financial and social situation of cabin crew members.

This thesis aims at understanding if the temporarily laid-off cabin crew members have per- ceived themselves as resilient during this lay-off period. It also aims at understanding what factors have affected their resilience and if Finnair as an airline has been perceived as supporting organisational resilience. The focus is on junior cabin crew members who have worked at Finnair for a maximum of three years.

The research method is a theme interview. Eight cabin crew members were interviewed. All interviewees had begun their career at Finnair in either 2018 or 2019.

Junior flight attendants were found to be resilient during the temporary lay-off. Protective mechanisms such as personality, financial stability and not having children were found to reasons for this. Other protective mechanisms included age, personal relation to work and, in some cases, other jobs or degrees they had besides their cabin crew work. Finnair was perceived as supporting organisational resilience, especially before the pandemic and in the first phases of the pandemic.

Research interviews were conducted in May-June 2020 while the pandemic was ongoing. Research report was written May-September 2020.