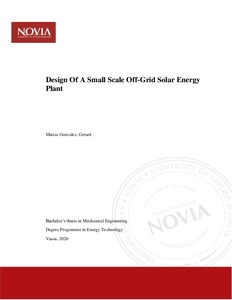 Marias Gonzalez, Gerard
All rights reserved. This publication is copyrighted. You may download, display and print it for Your own personal use. Commercial use is prohibited.
Näytä kaikki kuvailutiedot
Julkaisun pysyvä osoite on
http://urn.fi/URN:NBN:fi:amk-2020102121484

This report is the culmination of a ten-month design study on the feasibility of an off-grid photovoltaic installation in a cottage in Finland. The purpose was to calculate, size, and choose each of the components that made up the system considering numerous factors that could affect the operation and performance of each of them.

Much information was obtained from the simulation tool available on the Photovoltaic Geographical Information System (PVGIS) website. A range of simulations was performed for three different tilt angles and four different arrangements. Thus, the optimum inclination and orientation were found.

It has been noticed that the best performance was obtained with all the panels being faced to the South and between 45°-50° of tilt angle, being considered that the lower the inclination -in the months of April, May, June, July, and August- the more irradiation will be obtained, whereas for the other months -September, October, February, and March- a higher inclination would mean more irradiation being captured by the panels.

With the known irradiation and consumption, the corresponding calculations were made, choosing the most unfavorable case to obtain the correct dimensioning of each component of the system. Hence, concluding with the choice of the following elements: 10 photovoltaic panels (340 W each), 3 batteries with 3552 Wh nominal capacity each, 1 MPPT charge controller with a maximum opencircuit voltage of 250 V, and an inverter of 5000 W.

Finally, this thesis could be helpful to any person without previous knowledge interested in carrying out a solar installation not connected to the grid.