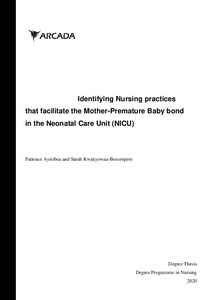 
Ayisibea, Patience
Kwakyewaa-Bosompem, Sarah
All rights reserved. This publication is copyrighted. You may download, display and print it for Your own personal use. Commercial use is prohibited.
Näytä kaikki kuvailutiedot
Julkaisun pysyvä osoite on
http://urn.fi/URN:NBN:fi:amk-2020111522912

The Theory of Human Caring by Dr Jean Watson is used as the theoretical framework and the study is a descriptive literature review which utilised inductive thematic analysis.

The findings revealed common themes that were found and summarized into two major themes and then divided into subthemes. The findings revealed that nurses can promote the mother-infant interaction and mother-nurse interaction to facilitate the bond between the mother-premature infant. The promotion of mother-infant interaction provides opportunities for physical contact, provides opportunities for remote monitoring, and opportunities for mothers’ participation in routine care. The mother-nurse interaction shows nurses need to communicate consistently, offer assurance, empathetic treatment, and exhibit trustworthiness to the parents at the NICU. The study finally points that, the NICU nurse possesses the power to either promote or hinder the bonding process. Because there is evidence that early mother-infant bonding is essential for an infant’s neurological development process, nurses should take the role of facilitating the attachment process from birth seriously.