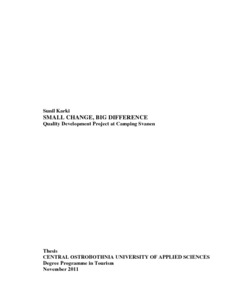 The aim of this thesis was to develop the overall quality level of Camping Svanen, situated in Pietarsaari/Jakobstad. The development was done through a renovation and designing project of three cottages. The camping site is owned by the town of Pietarsaari and since 2004 run every summer by Central Ostrobothnia University of Applied Sciences (COU), under the supervision of Centria. Centria is a research and development unit of COU. The thesis was commissioned by Jarl Sundqvist, who is a former development manager of Centria.

The thesis was practice-based and its main objective was to conduct a cottage renovation project followed by the marketing of the project. The marketing was done through press release, project updates on a Facebook group and Svanen wep-page as well as via brochure and leaflet distribution on the Kokkola Housing Fair. The project was sponsored by the town of Pietarsaari, who is also the owner of the camping site. The project did not involve any professional experts. All the project members were employees of the camping site for the summer 2011 as well as tourism students at COU. The designers were from the COU fur design department while the carpenter, who worked as a handy man, was from Optima Vocational School.

The renovation part of the project took about one and half month and it was open for the public to see for another month. Some articles were published in the local newspapers and over fifty people both from Finland and abroad, visited the designed cottages, as expected. The town was happy and positive about the project and they were being supportive in dif-ferent ways. In conclusion, the project was a success as it was able to achieve its objectives mentioned above. The cottages received new looks and the entire project helped to improve the overall quality of the camping site.