Lara Croft and Jill Valentine : understanding the representation of female protagonists in triple-A video games in the #MeToo Era 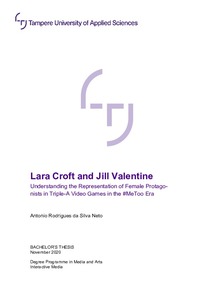 Recent years have seen a change in female representation in media as movements like #MeToo brought the issues of sexual harassment and abuse to the forefront of public discussion. The objective of this thesis was to analyze and understand changes made to the portrayal of two female protagonists from long running video game series, Lara Croft from Tomb Raider and Jill Valentine from Resident Evil, in response to a more gender-aware audience.

Their portrayals in the games were evaluated through feminist and queer lenses based on Laura Mulvey’s male gaze theory, Carol Clover’s Final Girl trope and Jack Halberstam’s queer discussion of the two concepts. A secondary objective of the thesis was to understand how those classic works of feminist film theory could be translated to video game analysis in 2020.

It was found that through their many appearances, both characters had their designs changed more than once and both had positive and negative aspects, particularly when it came to catering to the male gaze and over-sexualized character designs. Their latest iterations were found to be their most positive portrayals yet and a shift was noticed from the focus on sexualization to the punishment and a masculinization of female protagonists. Both characters had parallels to Clover’s Final Girl and while neither of the games had any openly queer representation, queer themes and metaphors were present in both, and venues for a possible queer gaze were found.

It was concluded that the portrayal of the female protagonists had improved through time but there were still issues present. A first attempt at a video game character analysis theory was made, focusing on two reflecting gazes, the developer gaze and the player gaze. Other topics were raised for possible future discussion, such as other protagonists to be evaluated, the nature of cross-gender player and character identification in video games, and the popularity of video game death-scenes compilations on the internet.