Automatization of the maritime transport versus job availability 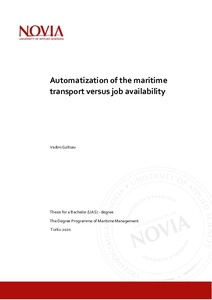 Thesis for a Bachelor of Maritime Management (732.4Kt)
Lataukset:

Goltsev, Vadim
All rights reserved. This publication is copyrighted. You may download, display and print it for Your own personal use. Commercial use is prohibited.
Näytä kaikki kuvailutiedot
Julkaisun pysyvä osoite on
https://urn.fi/URN:NBN:fi:amk-2020121227847

The shipping industry is one of the main employers globally. Wide use of the unmanned autonomous vessels in the future will change this role of the maritime transport. The study applies scenario analysis at company level to estimate how the availability of working places for navigational and deck crews will change due to transition from conventional vessels to autonomous one. Four scenarios were elaborated to estimate the number of people required to navigate and maintain a fleet of 10 vessels. Three future scenarios which assumed ships with certain degree of automatization were compared with the baseline scenario which considered the conventional vessels. In the Baseline scenario the fleet of 10 conventional vessels required 190 people. The ships with reduced crew in Scenario 1 required 121 people or 36% less compared to the Baseline scenario. In Scenario 2 the fleet of remotely controlled vessels needed 96 people or 49% less than in the Baseline scenario. The most technically advanced fully autonomous unmanned vessels in Scenario 3 could be operated with 90 people that is 50% less compared to the Baseline scenario. This study showed that automatization of commercial ships can lead to reduction of jobs available for seafarers with traditional maritime education.