Changing Attitudes Towards Seniors as Learners. Creating an Understanding of Seniors as Digital Storytellers 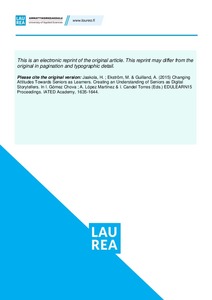 
Jaakola, Hanna
Ekström, Maria
Guilland, Auli
IATED
All rights reserved. This publication is copyrighted. You may download, display and print it for Your own personal use. Commercial use is prohibited.
Näytä kaikki kuvailutiedot
Julkaisun pysyvä osoite on
https://urn.fi/URN:NBN:fi:amk-2020121427977

Age experiences are constructed in the way we address a certain age-group. People easily self-stereotype and depersonalize themselves. “I am too old to learn” or “old dogs cannot learn new tricks”, are comments often heard in the context of technology in use.

One of the largest issues today is the reshaping of the population pyramids and the rapid proportional growth of the senior population especially in Japan and Finland. The ageing phenomenon is also interesting because of its role as a change agent in the society. The nature and meaning of being senior is changing. Cohorts approaching the somewhat stigmatized old age today do not fit the perception of previous generations. Future seniors are described to be healthier, better educated and more active, have more money to spend and be more open to digital technologies than the previous generations. The so called “baby boomers” are expected to have an important impact on the global economy. They can also be trailblazers in reshaping stereotypes and attitudes related to seniors as learners and users of digital technologies.

A promising trend reveals a change in the generational gap in technology use. While computers still remain the most used devices to access Internet among seniors, tablet computers have bridged the generational digital divide substantially. According to a global mobile consumer survey, adoption of tablet computers among people over 55 years has risen remarkably. Interestingly this same age group is the fastest growing demographic segment on social media sites.

This article is a part of an EU funded study called AHEAD that addresses seniors in five countries.

The article will elaborate upon the following issues: seniors as innovative technology users, social elements are essential in the learning process among seniors; creation of an experiential context encourages seniors to learn to use digital technology.