The sanctions regime in current international business and their impacts : Finnish sectors-level review 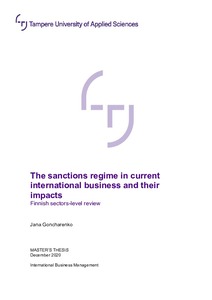 Goncharenko, Jana
All rights reserved. This publication is copyrighted. You may download, display and print it for Your own personal use. Commercial use is prohibited.
Näytä kaikki kuvailutiedot
Julkaisun pysyvä osoite on
http://urn.fi/URN:NBN:fi:amk-2020121428043

The aim of this Master’s thesis is to provide some theoretical insights and empirical evidence about the economic impacts of the Russian countersanctions on economies of the countries-imposed sanctions, in particular Finland.

Since the end of the Second World War, the international community has a tendency to resort to economic sanctions in order to punish and attempt to change a foreign country’s objectionable policy behavior. However, besides that economic sanctions involve two parties, the sender and the target, they invariably imply tangible costs in terms of bilateral trade of these countries, not merely to the sanctioned side.

The motive for the selection of this topic was numerous discussions in worldwide press and media whether the imposed Western countries' measures against Russia in 2014 were effective over the conflict in Ukraine and annexation of the Crimea. The primary interest is the estimation trade losses suffered by the economy of Finland as a result of Russia's countersanctions.

This work consists of the several parts which include an overview of the literature on this topic, in describing the historical framework related to economic sanctions and essential notions. The theoretical impacts of the sanctions are reviewed in the second part. The final sections introduce empirical analysis on the impact of economic sanctions on trade of the Finland and the general conclusions.

One needs to be mentioned that this work considers mainly the impact of the trade and economic sanctions on Finnish companies in the Russian market. Political costs or effectiveness of the implemented sanctions by the EU are not being addressed.