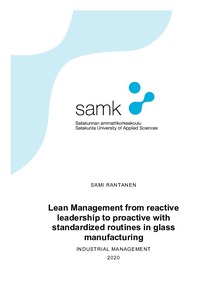 Rantanen, Sami
All rights reserved. This publication is copyrighted. You may download, display and print it for Your own personal use. Commercial use is prohibited.
Näytä kaikki kuvailutiedot
Julkaisun pysyvä osoite on
http://urn.fi/URN:NBN:fi:amk-2020121428140

This thesis was commissioned by NSG, Pilkington Automotive Finland Oy. Primary aim was to develop management routines for the three different management layers in the production line management. Lean principles were followed while creating these routines as well as lean six sigma technical tools was in use. Change management played important role in the design and implementation phase. Secondary aim of the thesis was to offer clear model for the lean management change that can be used as guideline to improve operations of other production departments in the company or in any other manufacturing environments altogether.

For the thesis, theory related to the topics that were included in the preliminary plan was studied. This included change management, lean six sigma, observation, and study techniques. After theory studies were conducted to gain more perspective on the current situation. Time usage of the first and second layer of the line management were studied and analyzed. Internal interviews as surveys were done to establish service level of the layer one of the production line management. Then came the development phase guided by the principles of change management. Lean six sigma tools were used with co-operation of the production line management and development personnel. In the implementation phase coaching theme was used with the guidance of the change management theory.

With the team effort and proper use technical tools provided management routines based on current situation. These routines implemented and monitored by documented audits gave transparency and possibility to understand any further development points. Management of the issues became lean, which gave efficiency to direct more resources to proactive side of the activities.

Systematical approach presented in the thesis made possible to develop new routines and justify existing ones. As a conclusion this thesis provides usable model to be used as guideline to improve management from reactive side to proactive side.