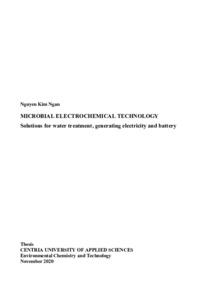 Nguyen, Kim Ngan
All rights reserved. This publication is copyrighted. You may download, display and print it for Your own personal use. Commercial use is prohibited.
Näytä kaikki kuvailutiedot
Julkaisun pysyvä osoite on
http://urn.fi/URN:NBN:fi:amk-2020121528200

The interest in Microbial electrochemical technology (MET) has boosted recently because of its ability to tackle the environmental issues such as energy scarcity and water pollution which are rising due to the population growth. MET produces products (e.g. biofuels, bioelectricity, biogas, chemicals) by interaction between living microorganisms and electrodes. Hence, both input material and output products are eco-friendly which makes MET different from chemical or physical treatments and MET could be applied in a wide range of industries such as wastewater treatment technology, manufacturing energy sector and electronics.

In this thesis, the discovery and development phases of MET were explained from the important landmarks to the electron transfer principles and the classification. Besides, Microbial fuel cells (MFCs) and Microbial electrolysis cells (MECs) are considered to be the most popular applications of MET since they are doing well as sustainable devices to manufacture electricity and synthesis of hydrogen gas. Moreover, the difficulties which MET is facing were also listed and discussed. The second part of this thesis was to prove the potential of MET to solve the relation issues of the mentioned industries by clear data and figures. In the water sector, MET can not only treat or purify both effluent and drinking water, but also be used in water sensors, bioremediation and metal recovery. Moreover, according to the positive results from many projects such as generating electricity from waste tomatoes, improving capacity of battery and recycling battery by fungi, MET is expected to replace the old manufacturing ways. Nevertheless, MET would be worth studying and developing with its promising role to function as a “green” solution.