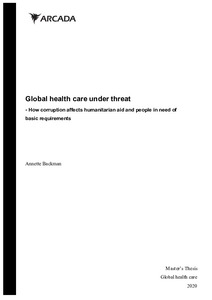 Backman, Annette
All rights reserved. This publication is copyrighted. You may download, display and print it for Your own personal use. Commercial use is prohibited.
Näytä kaikki kuvailutiedot
Julkaisun pysyvä osoite on
https://urn.fi/URN:NBN:fi:amk-2020121829440

The purpose of this thesis is to investigate what kind of threat corruption is to global health according to corruption in humanitarian work and development projects. Aim is to use this thesis as background material for pre-deployment training and education of aid workers. Global health covers medical issues globally and locally as diseases and crises reaches beyond borders. United Nations estimated in 2019 that approximately 139 mil-lion people will be in need of humanitarian aid during the current year. In 2015 there were 736 million people living under the poverty line. This includes lack of food, clean drinking water and sanitations. These numbers explain also the interest of the black mar-ket. It has been confirmed that small, fragile and conflict-affected countries preserve high poverty rates and high amounts of corruption.
In this thesis a qualitative method was used to investigate corruption as a phenomenon. Interviews were done and the choice of analysis of the collected data was inductive con-tent analysis.
The types of corruption are many and the appearance of corruption is sometimes very ob-vious and sometimes very hidden in the society and part of the culture. The types that arose from the raw data were the misuse of entrusted power, bribing, nepotism, embez-zlement and control of cash flow. Corruption is triggered by poverty mainly in low-income countries and by greed in high-income countries. Lack of transparency, weak governmental systems and lack of proper sanctions and control are factors that maintain corruption. Transparency is an important and obligated part during the mission.
Preparation before mission includes familiarizing oneself with the code of conduct re-garded to the mission. Furthermore, it is essential for the delegate to be aware of rules and norms of the responsible organization that concern upcoming work. The plan for the project should be made in advance to leave out the opportunity for corruption to interfere at all. The literature confirmed most parts of the results of the study.