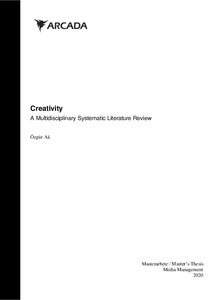 Ak, Özgür
All rights reserved. This publication is copyrighted. You may download, display and print it for Your own personal use. Commercial use is prohibited.
Näytä kaikki kuvailutiedot
Julkaisun pysyvä osoite on
http://urn.fi/URN:NBN:fi:amk-2020122229891

Creativity is the first stage of innovation and the essence of the cultural industries. Through a systematic literature review, this study aims to bring together several different understandings and conceptualizations of the creativity phenomenon from various disciplines to address two gaps: one in cultural industries studies and one in creativity studies in general. First, although creativity plays a somewhat pivotal role in the cultural industries studies since the turn of the 21st century, it is mostly to make suggestions about how to create environments to better assist the creative workforce, which forms the backbone of the cultural industries. However, cultural industries scholars often neglect the importance of the cognitive mechanisms, differences in individual, and sociocultural factors. Second, creativity studies have traditionally been dominated by works written by psychologists and behavioral scientists. For this reason, many creativity scholars call for more multidisciplinary studies on the phenomenon. This research reveals that creativity is conceptualized as a combination of cognitive abilities and processes, different modes of thinking, personal variables, and various environmental factors. There are various personality traits associated with creative individuals. However, according to the literature, certain individual variables, such as willingness to take risks, openness to new experiences, and intrinsic motivation, appear to play a more critical role in the cultural industries. The research has also revealed that creative individuals are more prone to depression or other types of mental disorders. This research found that even if the individual possesses all the internal conditions necessary for creative insights, their creative potential might never surface if the external stimulating factors are absent. Environmental factors are of vital importance in the ubiquity of creative expressions.