Management of an intercultural team in a case company 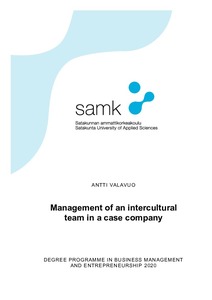 Valavuo, Antti
All rights reserved. This publication is copyrighted. You may download, display and print it for Your own personal use. Commercial use is prohibited.
Näytä kaikki kuvailutiedot
Julkaisun pysyvä osoite on
http://urn.fi/URN:NBN:fi:amk-202101191365

The objective of the study was to find out if different national cultures cause misunderstandings in a team and if so, how these misunderstandings could be avoided and is it possible to improve coherency and co-operation of the team by understanding these cultural differences? Other objectives were to find tools for team managers to avoid these misunderstandings and create concrete list of actions for the case company to help implement these instructions.
To achieve these objectives, characteristic of national cultures of the countries that the case company is present were studied based on the theories of Geert Hofstede and Project GLOBE. Sample of case company’s employees were interviewed to find out possible misunderstandings that had already happened. Study was conducted with qualitative methods as individual feelings were difficult or impossible to measure with quantitative
methods. Interviews were conducted as unstructured interviews to gain deep understanding of the phenomenon.
As a result, it was found out that even the phenomenon was not known of, it still was affecting studied teams. Interviewees were not able to identify national cultures, but actions and some opinions were characteristic for individuals from the nation presented.
Author was able to find out some shared opinions by analyzing the discussions and answer to the research questions.
It was found out that some additional guidance in case company was needed. Instructions and recommendations were presented, and objectives of the study were met. Reliability and validity of the study were met.