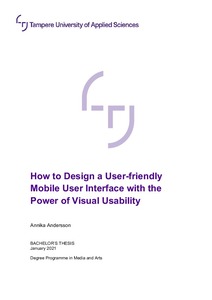 Andersson, Annika
All rights reserved. This publication is copyrighted. You may download, display and print it for Your own personal use. Commercial use is prohibited.
Näytä kaikki kuvailutiedot
Julkaisun pysyvä osoite on
http://urn.fi/URN:NBN:fi:amk-202102011767

The goal of this thesis was to design a mobile user interface with the power of visual usability. The aim was to create an application that would be simultaneously user-friendly and attractive. The research data was collected from literature and expert interviews, user interviews and user tests. The thesis consists of a theoretical and a practical part.

Further research is required to develop and improve the prototype and more user testing should be conducted. There should also be different versions of the prototype for other phones and platforms than Android to find other possible usability problems. All in all, the result shows that the goal of the thesis was achieved. By implementing the acquired learnings from the research in the project, it was possible to design a user-friendly and attractive mobile user interface with the power of visual usability.