Modelling and evaluation of the overall heating and cooling performance of jacketed reactor : Optimizing control of non-flow jacketed processes 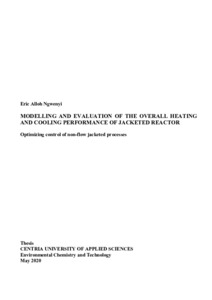 The thermal analysis and control performance of non-flow jacketed batch reactor utilizing steam-jacketed heating and water as cooling agent was investigated by an experiment and a theoretical simulation was conducted. Industrial systems are often characterized by their responses. However, determining the dynamic parameters of most systems as precisely as possible can be challenging. Nevertheless, it is important to determine the unknown dynamic parameters of the step response as accurately as possible since they are necessary for system identification. This paper analyses by experiment the performance of an insulated pilot plant jacketed reactor by heating-up and cooling-down of filled liquid (water) in the vessel. A graph of the change in temperature as a function of time was plotted accordingly after step-change and used to determine the time constant. Upon identification of the system dynamic parameters, the transfer function describing the fundamental dynamics of the plant was utilized to model the process. The mass flow of steam and the rate of the heat transfer were also evaluated based on recorded data. A control scheme was then proposed to predict the process with less delay time via a step-test using simulation. The experimental results showed that the variation in temperature was linear with no oscillations. The results controlling the system with a PI and PID controller demonstrated the PID controller scheme was more suitable for reaching the steady-state value fast.