Determining the best location of smoke sensor in office room 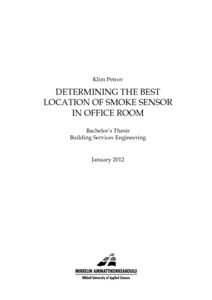 The aim of this Bachelor’s thesis was to determine the best location of the smoke detector in an office room. Research was divided into two subtasks. The first was a comparison of smoke detector installation instructions in 3 different countries (USA, United Kingdom, and Russia). Normative documents in these countries are similar, but each country emphasizes its own parameters which affect decision of the fire engineer. The second subtask was to carry out laboratory experiments. They were conducted to study the air flow patterns in an office room and response times of smoke detectors in different locations.

The investigated office room was about 11 m2, and there was a desk, chair and computer. The room had supply and exhaust valves. Four smoke detectors, connected to a panel, were placed in different locations (ceiling, walls, alongside of computer, and inside exhaust duct). Smoke generator was put under the table and smoke was introduced to the room as puffs. In reality this might resemble the situation in which the computer starts to burn and produce smoke. As soon as the smoke reached one of the detectors, a lamp was lit in the panel. The response time in seconds for each detector was recorded. Response times of 20 different locations of the smoke detectors were studied.

The best location according to the results is in points of the ceiling which are close to the expected ignition source and have sufficient air flow movement around them. Location inside exhaust duct gives the best response time, but it requires frequently cleaning of the smoke detector.