The Greens of Finland in social media: Facebook as a communication forum 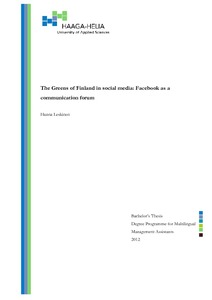 The Greens of Finland is a Finnish political party which is actively involved in social media in general, and on Facebook in particular. The objectives of this thesis were to assess Facebook as a communication tool for the Greens and to improve the party’s social media strategy. The research was made during the period from February 2011 till January 2012. The research methods used were mainly qualitative – content analysis was made on all data. Furthermore, typology and quantification were used in the analysis conducted on Facebook discussions.

The primary data come from discussions on Facebook during the government negotiations in spring 2011, when the Greens actively communicated on their Facebook page. Different comment types were created, based on the tone of discussion and the complexity of comments. The level of interactivity between people and the influence of communication means were also assessed. Discussion topics were not in the main focus of this research.

The results indicate that the Greens’ Communication Team knows the contents of their Facebook page quite well and that they use it in various ways. They benefit substantially from social media’s two-way communicational nature, but they could be somewhat more interactive. The discussion on the Greens’ Facebook page is equally analytical and critical; people tend to justify their opinions and not just express a feeling, for instance. Crowdsourcing – asking people to participate – creates the most discussion. As for social media strategy, volunteers’ help could be exploited more efficiently, the discussion online could be directed to a certain forum and different forums could be made more open to the public.