The Usage of IFRS in Finland and Germany 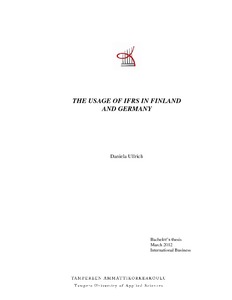 In this thesis paper the author examined how widely spread the use of the International Financial Reporting Standards (IFRS) is among small and medium sized companies in Finland and Germany. Also the reasons behind their decision to adopt or decline the use of the standards were analyzed. The benefits and disadvantages the companies perceived from the standards were also determined.

To achieve this, a quantitative research method was chosen utilizing an online questionnaire, which was sent to companies from all fields of business throughout Finland and Germany. The questionnaire consisted mainly of quantitative questions, but also had open ended questions bringing in a qualitative aspect. This way the companies were able to elaborate on the earlier given answers.

The results were examined regarding the IFRS usage percentage and attempting to understand the reasons behind the companies‟ decision whether to use or decline the use of the standards. For this the companies were inquired about the benefits and disadvantages of the standards that they have perceived for themselves. The next step was to compare the results of both countries to each other highlighting the differences and similarities.

The analysis indicated the main reasons of German companies to use the standards to be an actual or future listing on the stock exchange or business abroad. The complexity and high expenses of IFRS adoption for small and medium sized companies came out to be the main reasons for not utilizing it.
The Finnish companies appeared to have the same reasons for adopting the new standards as the German companies, but for them the major reason against it were the high costs alone - not the complexity.

These findings can be used for evaluating the benefits and disadvantages, that applying of International Financial Reporting Standards will provide for small and medium sized companies. This information can be valuable for improving the set of standards used for small and medium sized companies. The companies can use the results to evaluate the suitability of the IFRS for their business.