HOW PINK ARE YOU? : Creating Awareness of the Gay Market 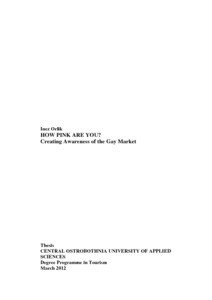 The objective of the thesis was to gather information on as well as draw attention to the Gay Market among representatives connected to the tourism business who met during the international fair Matka Expo 2012 held in the Helsinki Exposition and Convention Centre. The aim was to seek to improve the future situation on this particular niche market through increased interest and knowledge, which would lead to better understanding, cooperation and prejudice release. The thesis was aimed to make readers realize that this rich, influential market in many areas undiscovered and underestimated which is a potential loss for different branches of business today.

The theoretical framework of the thesis focused on the description of the Lesbian Gay Bisexual and Transgender (LGBT) community including a variety of aspects supported by specific examples in accordance with the discussed subject. The research method used in this thesis was quantitative questionnaire survey. Surveys were conducted with questionnaires, in order to gather empirical data from representatives connected to the business field. In total, 40 questionnaires were collected and the questionnaires were available only in English. According to the research questions, the data was systematically and carefully categorized and later analyzed. The questionnaires had global dimensions due to the fact that the respondents came from different nationalities, countries, continents and represented varying age groups.

The outcome revealed that respondents had certain knowledge on the pink market but still in many cases it was not being considered separately. Furthermore, some representatives were not interested in participating due to the given topic that was examined. However, other participants considered gays as profitable customers that may increase an income of certain business departments. Also they believed in increasing the tolerance of society and more destination choices for gays in the future. The majority of the respondents were female and respondents from two age group division of 21-30 and 30-40 had the highest amount of participants. All professionals chosen randomly belonged to the tourism and travel sector trade. The questionnaires provided data that clearly demonstrate that this niche market is under-researched and companies do not try to reach potential clients via different marketing strategies, such as, advertising its gay-friendliness in gay media or becoming a member of the IGLTA.