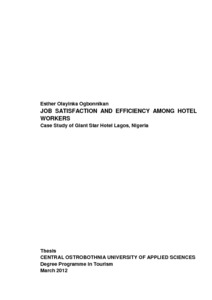 This thesis researched satisfaction and efficiency among hotel workers, through a case study of Giant Star Hotel Lagos in Nigeria. The thesis was commissioned by the Giant Star Hotel. The study sought to find out whether the employees of the hotel business were really satisfied with their jobs or not. In doing this, it was determined the extent of the level of their job satisfaction and how they could have been satisfied, if they had been in another field. The objectives of this research were to identify the various factors that actually triggered off or were responsible for the workers” satisfaction and to determine the major factor that made them satisfied with their jobs and their corresponding efficiency.

This research was basically informed by the need to actually know the factors that motivated hotel workers to carry out their professional duties effectively. It was indeed necessary to know whether these hotel workers were forced by circumstances to stay in the profession or if they were actually satisfied with their jobs. And also to find out their level of satisfaction. It was essentially necessary to determine the main factor that gave them the job satisfaction or dissatisfaction. In other words, it was determined how job factors such as pay, working conditions, relationship with boss, personnel policies and the work itself affected the job satisfaction of the hotel workers.

For the empirical part, a qualitative research method was used, this included the use of interview and observation. After the analysis of the results it were discovered that a lot of hotel workers were averagely satisfied with their jobs and job satisfaction leads to efficiency on the part of the employees. Recommendations were made to the employers of the hotel, and this could be useful for other hoteliers too, in order to have a good human relationship, employee satisfaction in the Giant Star Hotel in particular and the hotel accommodation industry in general.