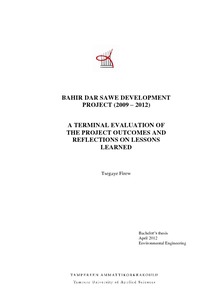 This thesis work is about the evaluation results of a development project that was implemented in Bahir Dar city of Ethiopia.

The Bahir Dar SAWE project was carried out during Feb 2009 – Feb 2012 under the financial support of Finnish Ministry of Foreign Affairs. KeTu ry was coordinating the project from Finland. KeTu ry, is a Finnish based NGO, whose aim is to promote economically, socially and ecologically sustainable development primarily in developing countries. Project implementation responsibility in Bahir Dar was shouldered by an Ethiopian based NGO, Lem Ethiopia – The Environment and Development Society.

This evaluation of the Bahir Dar SAWE Project outcome was carried out in the period 02.02.2012 – 13.03.2012. The task was commissioned by KeTu ry. The general purpose of the project evaluation was to assess the extent to which the project has achieved its intended objectives, to draw conclusions on lessons learned from the project implementation process and forward recommendations.

Primary and secondary sources of data were used. The secondary data came from desk review of project documents, project progress reports, annual reports, midterm evaluations and other relevant documents. The primary data (interviews, cases-study, and observation) was gathered from discussions and consultations with leading stakeholders with in the Bahir Dar city administration, Lem Ethiopia staff in Addis and Bahir Dar, Kebele leaders, members of SMECs and the target community.

The views collected from the different stakeholders about project performance and lessons gained from the experience were analyzed contextually with additional inputs from document review assessments, field observations of the actual project outputs and case study on target individuals. It is hoped that the result of this evaluation would help all stakeholders involved in directing future programs to a better performance.

The evaluation, from its findings concluded that the project has achieved its overall major objectives despite a number of implementation constraints that it had to deal with. These included the delay of land grant by the BDCA for the construction of sanitation technologies and the urban agriculture demonstration sites, underperformance of earlier project staff at Bahir Dar office of Lem Ethiopia and poor involvement of government stakeholders in the project implementation for about half of the project’s duration.