Searching for common ground : The views of music industry professionals and consumers on the distribution of recorded music in Finland 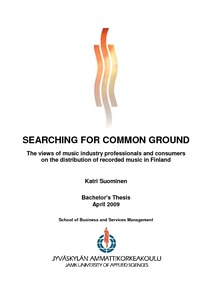 The way music companies operate has been, and continues to be, affected by technological developments – for example, the Internet has had a strong influence on distribution channels for recorded music. Consumers are using peer-to-peer networks to share music, leaving the recording industry with declining sales and pushing record labels to seek alternative methods of bringing their product to the market. A need for research into how this gap can be bridged was thus identified.

The aims of the research were first to identify alternative methods for distributing recorded music from literature, and then to investigate whether, in a Finnish context, they would be considered desirable by consumers and viable by professionals working in the music and media industries. The research employed a mixed method incorporating both qualitative and quantitative elements, namely interviews with three industry professionals and a consumer survey.

The findings from the literature, interviews and survey were triangulated in order to draw conclusions. The results showed that the views of the industry professionals and consumers met to some extent, in that while new and creative ways of distributing recorded music seem to be a growing trend, many consumers also still want to buy physical records in the traditional way. Furthermore, it appears that the methods of distribution for recorded music will continue to be diverse, rather than settling into to one accepted model.

Finally, due to the constantly changing marketplace and the development of new methods of distribution, further research into the relationships between all parties involved in the distribution chain is recommended, in order to attempt to find mutually desirable models.