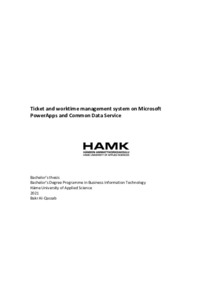 Al-Qassab, Bakr
All rights reserved. This publication is copyrighted. You may download, display and print it for Your own personal use. Commercial use is prohibited.
Näytä kaikki kuvailutiedot
Julkaisun pysyvä osoite on
http://urn.fi/URN:NBN:fi:amk-202102222566

The objective of the thesis was to analyze the data and digitalize it to the user. The data will be gathering from the Employees' mobile devices.
The Data Center is integrated into Azure DevOps and Common Data Service environments. The system was used to start reclamations and avoid mistakes. The system was usable in both mobile devices and Desktop environments. The required functionalities included data gathering and handling the data. The data consisted of several columns such as start time, end time, duration and the holder of the data. The data was stored in the commissioner's Common data service cloud for further inspection.

The outcome of the project enabled efficient work management and more accuracy in the project organization. The project helped in distributing the work among the employees. The project was implemented for A-A White Blue consulting OY Company.

The system was tested under a typical environment for a short period. The system's ability to handle pressured work was not tested. Future work can be comprehensive testing and further developments. The development may consist of expanding the system extension with the possibility to connect with the Jira system and the Azure DevOps system.