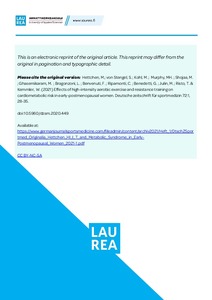 Purpose: The menopausal transition is a critical period in wo-men’s lives. The central aim of the present study was to evaluate the effect of a multimodal exercise protocol on the cardiometa-bolic risk factor potentially related to menopausal transition in early postmenopausal women.›Methods: Fifty-four (54) early-postmenopausal women (54.0±1.8 years) were randomly assigned to two groups: (1) exer-cise group (EG: n=27) which conducted a high intensity aerobic and resistance training three times/week and (2) active control group (CG: n=27) exercising once a week w ith low exercise inten-sity. Besides bone density, the main variable of this project, the outcome variable in this thesis was also cardiometabolic risk, as summarized by the Metabolic Syndrome (MetS) Z-Score. We applied Intention-to-Treat (ITT) and Per Protocol Analyses (PPA) w ith multiple imputation and used standardized mean differen-ces to illustrate the effects.›Results: After 16 weeks of exercise two participants (EG: n=1; CG: n=1) were lost to follow-up. Effects for the MetS Z-Score were moderate (EG: -0.36±1.36 vs. CG: 0.51±2.28; SMD: 0.47, 95% CI: -0.08 to 1.03), albeit borderline non-significant (ITT: p=.089; PPA: p =.0 6 0). ›Conclusion: The present multimodal exercise protocol just fai-led to affect the MetS Z-Score and its underlying cardiometabolic risk factors. Whether this result can be generalized to the entire cohort of early-postmenopausal women or whether it has to be attributed to the only moderately high exercise intensity during the early weeks of the intervention along w ith a relatively short intervention period remains to be evaluated.