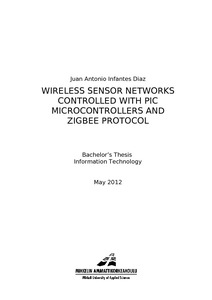 When we thought about installing our house with home automation and we went to the market to see what were the technologies that were being used, we found the X-10
protocol as a Home Automation standard protocol. Although this is a proprietary protocol, it showed up in 1975 and this made that lot of houses nowadays use this system, actually, more than 8 millions of houses use X-10 protocol.

X-10 protocol has many problems that will be covered during this thesis and due to the problems that we found if we tried to use the power line for transmitting the information to the devices that were controlling the house elements (like lights, microwave) and the problem that we found if we tried to wire a old building, the best alternative was using a wireless communication.

The objective of this final thesis was developing a Wireless Auto-organized network library for Pinguino project using Zigbee technology for Home Automation. This library was joined to Mister House Home Automation control system.

At the end of the project, we installed Pinguino 32 bits devices in the points of the house that we wanted to control (for example lights) and later, using a Web Interface we were able for example to turn on or off those lights.