A Study of Gas Emissions from Dry Toilets 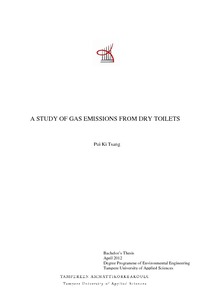 Composting the human excreta in a dry-toilet is a widely applied procedure for stabilizing its organic matter content. A proper water balance in compost is an essential element in maintaining the microbial activity in the compost-mixture, and the moisture content of the compost can be significantly decreased by too intensive ventilation, which affects directly the composting performance. . The inevitable gas emission from the dry toilet, which indirectly reflects the composting process, is another important concern. Also, due to evaporation and aeration of the composting tank, precious nutrients, mainly ammonia-N, can be lost.

The main aim of the study was to understand the composting process from the gas emissions of the excreta. Two dry toilet models were used: Naturum, where urine is separated from the faecal matter, and the Dual-layer dry toilet, which is a mixed composter. The monitoring time of three months was divided into four periods, regarding the adjustments of air ventilation and moisture content. The scope of the work was to evaluate the CO2, O2, H2S, NH3 and CH4 emissions, temperature and relative humidity from the composting, and also to optimize the air exchange and consequently the composting process.

The cumulative emission of the gases in the 3-month monitoring time was calculated. For the Dual-layer dry toilet, the cumulative emissions in the four periods were 2.9g±28mg for H2S, 2508g±20g for CH4, and in the last three periods 12g±193mg for NH3. In Naturum, only the H2S emissions could be quantified, being about 418±148mg over the 3-months. The recommended parameters for both toilets were a moisture content of 35-40%, and an air ventilation rate of 5L/s for the Dual-layer dry toilet and 2-3L/s for the Naturum respectively.