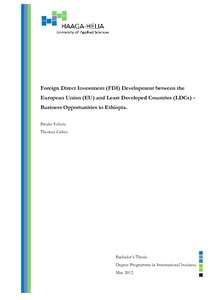 Foreign direct investment (FDI) is a category of international investment that indicates an intention to acquire a lasting interest in an enterprise operating in another economy. This study assesses the development of FDI between EU and Least Developed Countries and also examines investment opportunities in Ethiopia.

The primary goal was to examine economical and social contribution of FDI inflow. In addition, this study assesses Ethiopia's business opportunity, FDI policies, incentives and investment risks in the country. The scope was primary focused on assessment of Ethiopian investment in particular.

The study was relied on reviewing secondary data. It also used primary sources i.e. structured interview and questionnaire. The research is descriptive which is characterized in simply puts the findings based on the facts gathered from the survey that was conducted from 12, July-
2011 to 07, May 2012.

The Finding shows that Ethiopia is now becoming the major FDI inflow destinations from LDC’s in Africa. Major factors that contribute to the growth of FDI includes fertile land, conducive climate condition and availability of relatively cheap labor in the country.

In comparison with other forms of capital flows, it is also more stable, with a longer-term commitment to the host economy. Major risks of FDI includes land grabbing, food insecurity and poor practice in environmental protection of the host country.