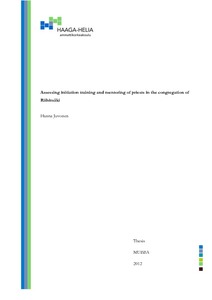 The objectives of this thesis were to assess the initiation training and mentoring prac-tices of priests currently associated with the congregation of Riihimäki. This congregation is a middle-sized Lutheran parish belonging to the diocese of Tampere.
The focus of this research to assess only this group of priests, as this territory has not been researched from the perspective of organizational communication.
With the help of background information and organizational communication theories, the goal of the empirical part of the study was to reveal common truths and beliefs among these priests. The research was conducted during the period from February 2010 to April 2012. The qualitative method was used and a theme interview formed the empirical part of the study. The research group consisted of all priests working for the congregation at the time of the interviews, altogether 11 people. The answers were analyzed using inductive reasoning and all of them were weighted separately, by mean-ing clauses and whether they had a negative or positive emphasis.
One of the main objectives of the study was to make improvement suggestions for the congregation; it is up to the commissioning party whether to apply them or not.
As an outcome of this research, these improvement suggestions are feasible not only by the congregation of Riihimäki, but also by various other congregations in Finland.