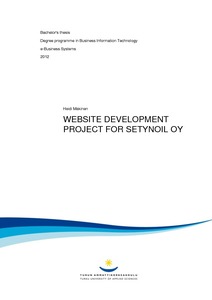 The objective of this thesis project was to design and develop a website for Setynoil Oy, one of the largest oil product packing companies in Nordic countries. Company faced problems with previous website project and their existing site was never fully finished. Need for the website was obvious and contract was made in late December 2011.

First steps of the project were taken in late December 2011 when the first meeting with the client took place. Setynoil Oy CEO had an urgent need for a website in order to provide information for their partners and to promote their businesses online. Client had a half ready website published on the Internet but it was never fully finished and Setynoil Oy CEO wanted the old site to be replaced as soon as possible. Together with the client was agreed that the project will be part of a Bachelor thesis project and that it will be done in a very tight schedule in order to provide the service online rapidly. Deadline was agreed to be at the end of April 2012. That was the time when the first version was to be published.

Process started to run fully in late January 2012 with gathering information together with the client and putting on a paper some of the features they would like to have on their page. Developed site needed to be very simple to use with professional looking layout and an easy navigation. The main characteristic of the site should promote the industry they operate in. Other than that, free hands were given to further develop the site.

This project was developed by using the Agile Methods. It was more convenient than for example the old fashioned Waterfall method and suited well to develop fast and with no specific plan. The Development environment was chosen after scaling different options. As the time was very limited and no budget was included, the solution chosen needed to be an Open Source service. Joomla! was selected from various CMS tools and found out to be a straightforward system to use for developing as well as for client usage.

There was a rather strict timeline for this Project as the client is well-known and their need for functioning website was high. Client gave free hands with the design and structure but required a simplified website with only necessary content.