Discussions on Finnish University Reform in the media 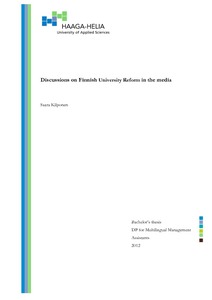 Finnish university reform was implemented by the Ministry of Education and Culture between 2008 and 2010; it was a significant change in Finnish society. Change management and change communication are vital these days, both in the private and public sectors. In this thesis change management and change communication are analysed from the public sector point of view. The empirical part deals with media publicity regarding Finnish university reform.

The objective is to find out how this reform was discussed in the media and to what extent the core messages presented in the reform’s communication plan were reported there. Change resistance and the process of commitment are also discussed.

Both quantitative and qualitative research methods are used. In addition to a theoretical framework built on relevant literature, a content analysis is done based on news items collected by the Communication Department of the Ministry of Education and Culture. The entire research process was conducted between September of 2011 and April of 2012.

The research results reveal that core messages were for the most part presented well in the media; this supported the communication plan. The overall tone of the items was quite critical, however. During the research process specific themes also arose from the data sample. These themes were also discussed, forming a further basis for analysis.

It was shown that special consideration should be given to change resistance and the commitment process of interest groups. Change resistance towards the reform was considerable, and there seemed to be an overall feeling that the reform process itself was too secretive. This in turn made it difficult for the process of commitment to be integrated into the overall progress of reform.