“THE BOYS GET THE PLEASURE THE GIRLS GET THE PAIN" : The views of teenage girls in Kenya concerning the causes and prevention of teenage pregnancy 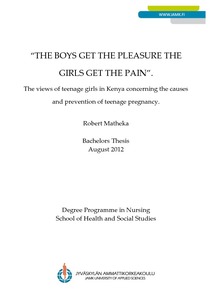 The purpose of this study was to find out teenagers’ views concerning the causes and prevention of teenage pregnancy in Nguluni located in Kenya. The aim was to get important information that can be used by partners and stakeholders who have a role in reducing teenage pregnancy. This study was qualitative through participation of 40 female students aged 13-16 from a local mixed day high school. Narrative study was used to collect data where participants wrote essays. Data was analysed by content analysis.

The results showed that causes of teenage pregnancy were peer pressure which led to bad decisions. There was lack of guidance and counselling because parents hardly took time to guide and counsel their children due to lack of time and required knowledge. Poverty in the area has caused early marriage, prostitution, dangerous relationships, substance abuse and alcoholism. Teenagers engaged in unprotected sex when they were under the influence of illegal drugs and alcohol and were subjected to rape. The results also showed that senior male students and teachers took advantage of female students who are not acquitted to school environment. Taboos had led to early marriage of young girls while media exposed teenagers to explicit material such as pornography.