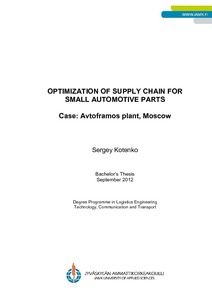 OAO Avtoframos faced the necessity of changing the way of supplying the certain batch of parts, which are small automotive parts PPA, to the Avtoframos production plant in Moscow. The objective of this research was to provide the most efficient and cost-effective solution taking into account all the involved processes within the plant.

The closer look to the current supply mode was described with its drawbacks and reasons why it had to be optimized. Those included growing stock, ineffective storage of parts at the warehouse, lack of space in the warehouse, and sufficient amount of lost or damaged parts. The research was conducted to optimize the warehouse premises according to new supply method of parts, to organize the distribution and storage of parts at the line side, to create the new distribution route for operators according to current developments, and to see which changes had to be applied at the reception.

The results were seen in decreasing stock and six times more free space in the warehouse, convenience of storing of parts, less occupation of operators distributing the parts, less inventory circles, as well as more free space at the reception and a fewer number of lost parts. All these were significant to OAO Avtoframos when considering whether to implement the optimization steps proposed in this work.