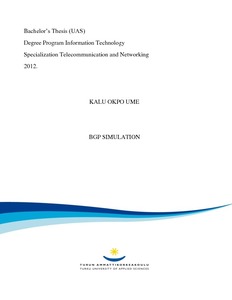 The increase in network traffic due to over dependence on the Internet has made the Border Gates Routers (BGR) vulnerable to attacks. This over the years has been a major issue of discussion within the network engineers and the user communities.
These draw backs have led to the proposing of the use of BGP network Simulators to allow for design, proper analysis and evaluation of network behaviors under different scenarios. The use of a centralized Remote Router Validator (RRV) for verifying router attributes from different Autonomous System (AS) is implemented as a solution to solve these drawbacks (issue of false identity and announcement) by adversaries pretending to be who they are not. The RRV checks all parameters sent to it by comparing it with the attributes cached locally in its database and validate them by appending a signature on the packets and sending them back to the sending AS if all attributes are matched.