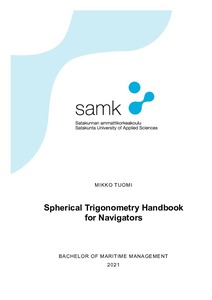 Tuomi, Mikko
All rights reserved. This publication is copyrighted. You may download, display and print it for Your own personal use. Commercial use is prohibited.
Näytä kaikki kuvailutiedot
Julkaisun pysyvä osoite on
http://urn.fi/URN:NBN:fi:amk-202103183538

The objective of this thesis was to produce a handbook of all the relevant information regarding the mathematics and the practical real-world applications of spherical trigonometry and, more generally, the concept of Great Circle Navigation, relating to the fundamentals behind the practice of navigating ocean-going vessels on the high seas.

While exhaustive research on the subject-matter had already been completed in the centuries past, the need was felt to compile a summarized, compact, version of the overwhelming scientific data, into a handbook that could be used, for instance, by students in Maritime academies, already practicing navigators or anyone interested in navigation as a whole.

As the premise behind the work was to introduce a quick-reference tool, it was self-evident from the start of the project, that certain parts of the theory would have to be left out, such as, the thorough derivation of the formulae used. Only those, whose understanding was felt necessary for the end user, were included. The same basic spherical trigonometry formulae are also used in Celestial Navigation, but as it pertains mostly with position fixing rather than the actual navigation part, it was left out of this thesis.

On the other hand, the concept of Rhumb Line Navigation was felt imperative to be included, as it highlights the difference in distances covered when compared to those by sailing along great circles.

Furthermore, rhumb lines are an integral part of the actual practice of ship navigation in the real world, in that they are combined with great circle navigation in a practice known as Composite Sailing.