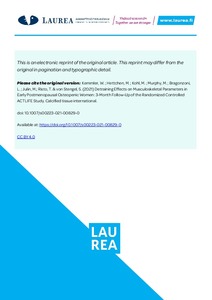 Periods of absence from supervised group exercise while maintaining physical activity might be a frequent pattern in adults’ exercise habits. The aim of the present study was to determine detraining effects on musculoskeletal outcomes after a 3-month detraining period in early post-menopausal, osteopenic women. Due to the COVID-19 pandemic, we terminated the 18-month randomized controlled ACTLIFE exercise intervention immediately after the 13-month follow-up assessment. This put an abrupt stop to the high-intensity aerobic and resistance group exercise sessions undertaken three times per week by the exercise group (EG: n = 27) and the gentle exercise program performed once per week for the attention control group (CG: n = 27); but both groups were permitted to conduct individual outdoor activity for the 3-month lock-down period. Study endpoints were lean body mass (LBM), bone mineral density (BMD) at the lumbar spine (LS), maximum hip-/leg extension strength and power. Detraining-induced reductions of LBM, hip/leg strength and power (but not BMD-LS) were significantly greater (p < 0.001 to p = 0.044) compared with the CG. Significant exercise effects, i.e. differences between EG and CG, present after 13 months of exercise, were lost after 3 months of detraining for LBM (p = 0.157) and BMD-LS (p = 0.065), but not for strength (p < 0.001) and power (p < 0.001). Of note, self-reported individual outdoor activities and exercise increased by about 40% in both groups during the lock-down period. Three months’ absence from a supervised group exercise protocol resulted in considerable detraining effects for musculoskeletal parameters. Thus, exercise programs for adults should be continuous rather than intermittent.
Trial registration number: ClinicalTrials.gov: NCT04420806, 06.05.2020.