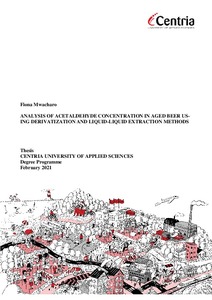 Mwacharo, Fiona
All rights reserved. This publication is copyrighted. You may download, display and print it for Your own personal use. Commercial use is prohibited.
Näytä kaikki kuvailutiedot
Julkaisun pysyvä osoite on
http://urn.fi/URN:NBN:fi:amk-202103203629

The flavour of beer is a significant component for beer producers. It is important to consistently produce quality beer with the expected flavour and aroma. However, after packaging, flavour compounds in beer are not in a state of chemical equilibrium but are involved in chemical reactions that occur until the beer is consumed. These reactions typically result in a decrease of the expected fresh flavour and an increase in compounds that correspond to what is known as aged flavours. These aged flavours are unpleasant and include cardboard and green apple flavour. One of the compounds that contributes to aged flavour in beer is acetaldehyde.

The aim of this thesis was to analyse the concentration of acetaldehyde in the lager beer called Helles produced by Kahakka Breweries in Kokkola, Finland. Three different batches of Helles produced approximately four months apart were analysed using GC-MS. Due to the volatile nature of acetaldehyde, the beer was derivatized first using O-(2,3,4,5,6-Pentafluorobenzyl)hydroxylamine hydrochloride to form more stable acetaldehyde oxime isomers and extracted via liquid-liquid extraction before GC-MS analysis.

The results showed that the levels of acetaldehyde in the beer were below the flavour threshold of approximately 10 mg/L, with the maximum detection at 7.98 mg/L and the lowest at 1.40 mg/L. The method used proved that it could be used for the detection of acetaldehyde in beer. However, the accuracy and repeatability of the method could not be proved as the experiment was conducted once. Furthermore, the method used was extremely time consuming (approximately 6 hours) and had many steps which increased the potential for errors and inaccurate results. It is proposed that a different method such as headspace, solid phase microextraction or stir-bar sorptive analysis is employed which are less time consuming and have less potential for errors. These methods could then be repeated to determine their accuracy and repeatability before conducting the experiment for more accurate results.