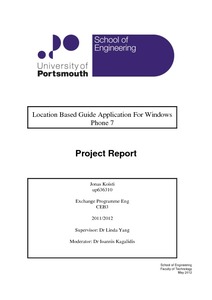 Location based guide application for Windows Phone 7 is a final year computer engineering project that was done in the University of Portsmouth. This project consists of a report, logbook and the actual files used in the application. Project was done for the Windows Phone 7 operating system and will showcase the map implementation techniques used in the mobile phone platform. A lot of data is handled in this project, which consists of different venues around the city of Portsmouth. These venues are saved to a SQL compact edition database saved inside the mobile phone.
Different venues in this project can be browsed in different screens to help the users of this application to find venues appealing to them, in the city of Portsmouth. Application also helps people to find their way around the city by showing their position in the map, implemented using Bing maps service. Among the other venues, the University of Portsmouth buildings are also showcased in this application.
This report will talk about the design of this project, which was mainly done with the Expression Blend 4, and the different parts of the screen, how they work and why they were included in the project. All the programming was done by using C# language and the Visual Studio 2010 Express for Windows Phone 7. There is also a discussion part, where we’ll talk about the project as a whole and what results were achieved and how they reflect to the original project plan. In the end of the the report, there are some good features that could be implemented in the future, if this project is worked on later.