Comparative study of environmental impact of biofuel, electric and conventional passenger cars in the context of Finland 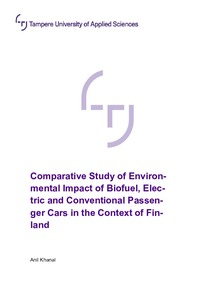 Khanal, Anil
All rights reserved. This publication is copyrighted. You may download, display and print it for Your own personal use. Commercial use is prohibited.
Näytä kaikki kuvailutiedot
Julkaisun pysyvä osoite on
http://urn.fi/URN:NBN:fi:amk-202103223668

The purpose of the thesis was to compare the environmental impact of mid-range cars; Toyota corolla as a conventional car, Nissan leaf 40kWh as an electric car and a Toyota corolla modified as a Flexible Fuel Vehicle (FFV). Petrol, electricity and ethanol were the fuel types considered for these cars respectively. The environmental impact was analyzed based on greenhouse gases (GHGs) emitted during their whole life cycle. The emissions during the production phase of fuel, vehicle manufacturing, battery manufacturing and usage phase were considered. The research was conducted through literature review. Likewise, the data of emission was analyzed from the LIPASTO Traffic Emission, JEC Well to Tank report v5 and from the company’s sustainability reports.

Thus, it can be concluded that the electrification of fleets and use of the biofuel cars should be promoted to meet the EU and national targets. Purchasing of electric passenger cars and conversion of conventional cars into flexible fuel vehicles can be effective measures for a significant reduction of overall emissions from passenger cars.