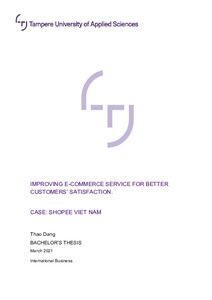 Dang, Hoang Hanh Thao
All rights reserved. This publication is copyrighted. You may download, display and print it for Your own personal use. Commercial use is prohibited.
Näytä kaikki kuvailutiedot
Julkaisun pysyvä osoite on
https://urn.fi/URN:NBN:fi:amk-202103293977

This bachelor's thesis was done with the purpose to find out the existing problems for one of the biggest online marketplaces in Viet Nam: Shopee, using theoretical approach. From the findings, suggestions were given for each problem to help Shopee improve its service, increase its competitiveness and reputation on the market. This thesis was not commissioned by Shopee, and the research was done without the company’s participation or company-owned data.

The problem of Shopee was spotted from observation through review sites where Shopee was constantly rated very low and received many negative reviews. An interview was conducted randomly on the walking street to collect honest opinions from customers of Shopee. The answers were then analyzed and synthesized into a graph. The most concerns from Shopee's customers were revealed from the analysis which is: delivery, customer service, and conflicts between buyers and sellers.

From the result, relying on theoretical background on the three concerns, feasible solutions for improvements were suggested which would help increase competitiveness and reputation of Shopee on the market. Shopee is different from other online marketplaces because it opens opportunities for more people to join easily, the downside for this way of doing business is that more problems occur which affects the trustworthiness of Shopee's customers.

The reviews were observed from international review sites as well, Vietnamese customers' reviews were more considered. Even though Shopee does change their regulations often, the problems spotted out still exist and Shopee should consider these feedbacks from their customers more than focusing on trying to do different experiments for their business themselves.