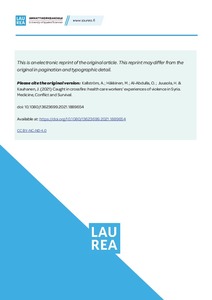 Health care is attacked in many contemporary conflicts despite the Geneva Conventions. The war in Syria has become notorious for targeted violence against health care. This qualitative study describes health care workers’ experiences of violence using semi-structured interviews (n = 25) with professionals who have been working in Syria. The participants were selected using a snowball sampling method and interviewed in Turkey and Europe between 2016–2017. Analysis was conducted using content analysis. Results revealed that the most destructive and horrific forms of violence health care workers have experienced were committed mostly by the Government of Syria and the Islamic State. Non-state armed groups and Kurdish Forces have also committed acts of violence against health care, though their scope and scale were considered to have a lower mortality. The nature of violence has evolved during the conflict: starting from verbal threats and eventually leading to hospital bombings. Health care workers were not only providers of health care to injured demonstrators, they also participated in non- violent anti-government actions. The international community has not taken action to protect health care in Syria. For health workers finding safe environments in which to deliver health care has been impossible.