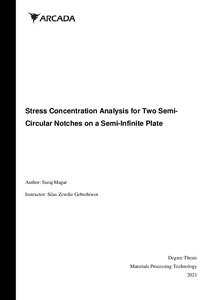 Magar, Suraj
All rights reserved. This publication is copyrighted. You may download, display and print it for Your own personal use. Commercial use is prohibited.
Näytä kaikki kuvailutiedot
Julkaisun pysyvä osoite on
https://urn.fi/URN:NBN:fi:amk-202103293965

Notches in an engineering part appreciate the stress concentration around its stress field and presence of multiple such notches in the part can either have mitigating effect on stress concentration or increment effect. The thesis studies the stress distribution in a semi-infinite plate with two interacting semi-circular notches subjected to uniaxial loading parallel to the arrangement of notches by analytical method using theory of elasticity and computational method using COMSOL Multiphysics. The parameters for the study were center-to-center notch distance and notch size where the center-to-center notch distance was set to be 2.5a, 3.34a, 5a and 10a while the notch size for the first notch was set to be a, 2a and 3a, where ‘a’ is the radius of a notch. The interaction effect is assumed to be diminishing as the distance increases from 2.5a to 10a and the thesis studies this diminishing interaction effect. The stress concentration factors reported by the study for the interacting notches from analytical method increased from 2.4579 to 2.9538 as the center-to-center notch distance increased from 2.5a to 10a indicating vanishing interaction effect. These results were comparable to the results obtained from the computational method with a certain percentage of errors. Similarly, the stress concentration factors reported by the study for the interacting notches from analytical method decreased from 2.9538 to 2.6676 as the notch size of first notch increased from a to 3a while maintaining the center-to-center notch distance to be 10a, indicating increasing interaction effect. These results had good agreement with the results obtained from computational method with percentage errors ranging from 3.52 to 13.76 for center-to-center notch distance case and 1.52 to 6.06 for notch size case. The approaches used in the thesis provide satisfactory results in comparison to a finite element method, however more study is recommended for its validation.