Machine vision -based fall prevention and detection system in a neurological ward : Effectiveness and personnel's attitudes 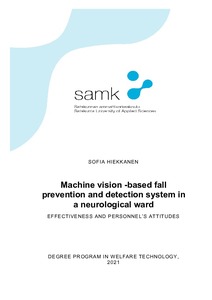 Hiekkanen, Sofia
All rights reserved. This publication is copyrighted. You may download, display and print it for Your own personal use. Commercial use is prohibited.
Näytä kaikki kuvailutiedot
Julkaisun pysyvä osoite on
https://urn.fi/URN:NBN:fi:amk-202104014140

The objective of this thesis was to study the effectiveness of, and the personnel’s attitudes toward, Verso Vision, which is a machine vision -based fall prevention and detection system. The system has recently been implemented to use in an inpatient ward, cowering a total of 12 patient beds, in a University Hospital. The system gives an alarm if it detects a fallen person or if it detects predefined movement by a patient it has been activated to.

The research was twofold. Firstly, patient safety incident reports (HaiPro) regarding fall events were examined retrospectively. Two 9-month time periods were selected, one before and one after the implementation of the system. This was to gain insight on the statistics of the fall events and the possible identifiable changes in the fall events’ nature. Secondly, a survey was conducted to the personnel of the inpatient ward to find out about their attitudes toward the system, their perceived proficiency to use it, and the system’s technical functionality according to them. The research was a mixed method study, with emphasis on qualitative methods. The data was mainly analyzed using deductive and inductive content analysis and frequency distribution.