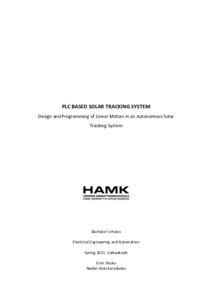 
Shuku, Eron
Karadadas, Nedim Ates
All rights reserved. This publication is copyrighted. You may download, display and print it for Your own personal use. Commercial use is prohibited.
Näytä kaikki kuvailutiedot
Julkaisun pysyvä osoite on
http://urn.fi/URN:NBN:fi:amk-202103314070

This thesis was commissioned by the Electrical Engineering and Automation degree programme at the Häme University of Applied Sciences (HAMK), with Katariina Penttilä as the thesis supervisor. The target of this project was to establish a solar tracking system with programmable logic controller as its controlling unit. More specifically this project concerned the programming of the linear motors that were used to move the solar panel into the desired angle. Furthermore, a comparison was drawn between traditional static solar panels and various tracking systems. This was done by examining other peer reviewed research into the effectiveness of such systems in different environmental conditions, as real-life testing of this particular system was difficult to prepare during the Covid-19 pandemic.

The programming of the system was done with a Siemens Programmable Logic Controller, specifically the S7-1200 series, through TIA Portal v15.1. Hardware wise, it had two linear motors, which had a feedback system and through retraction and extension, move a panel at the optimal angle. To accomplish this, a sun position calculating algorithm, developed by the National Renewable Energy Laboratory in the United States, was used, as well as its adaptation by Siemens. The algorithm provided the angle at which the panel would be positioned and moved the motors there automatically. In addition, there was a manual mode, which allowed the user to adjust the panel angle at the preferred position. The tracking in this system, was both single, and dual axis. In the single axis mode, the Y-axis motor was static, whilst the X-axis motor derived its data from Siemens’ PHI angle calculator function block. This provided an angle in which the panel needs to be repositioned for optimal tracking. Dual tracking utilized the zenith and sunset and sunrise times for motor tracking.

Dual axis tracking is a difficult and costly method to implement. Using sunrise and sunset times to facilitate dual axis tracking is an atypical and unproven method, and warrants more research before implementation. On the other hand, the single axis feature of the system is an accurate and established approach, with promising earlier results. When in range, the system has a tracking accuracy of ±1°. Data analysis from research shows that even a single axis three-position system can increase efficiency and make solar tracking a worthwhile endeavour.