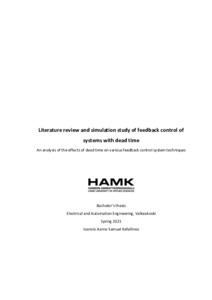 In this thesis various common situations in system control with different dead times and model accuracy are used to test various controller applications to further understand and write down the effects of measured and unknown dead times on different commonly used feedback control systems and their tuning methods. This testing of controllers was done in a Single-Input-Single-Output, First order plus dead time context using Matlab-Simulink to analyze the effects both with measured and unknown dead time on controller performance.