Perceptions of global citizenship among teacher education students : a study at the University of Education Weingarten 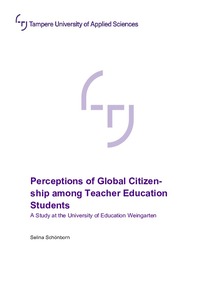 Schönborn, Selina
All rights reserved. This publication is copyrighted. You may download, display and print it for Your own personal use. Commercial use is prohibited.
Näytä kaikki kuvailutiedot
Julkaisun pysyvä osoite on
http://urn.fi/URN:NBN:fi:amk-202104084428

Global citizenship (GC) is increasingly considered as one solution to unprecedented global challenges and forms part of many internationalisation programmes. Despite the increasing promotion of GC also in initial teacher education, it remains a contested and ambiguous concept. The purpose of this study was to reveal the subjective perceptions of GC among teacher education students (TES) at the University of Education Weingarten and how they align with the liberal, neoliberal and critical theory of GC.

This study applied a mixed methods design and collected data through a quantitative as well as a qualitative method. TES answered an online questionnaire and participated in semi-structured interviews, whereby both collection methods were introduced simultaneously and data was used in a complementary way. Collected quantitative data was analysed via Microsoft Excel and content analysis method was used for the analysis of collected qualitative data.

Findings indicated that TES’ subjective perceptions of GC are heterogeneous and align with all three theoretical frameworks of GC: the liberal, neoliberal and the critical. Besides a strong alignment with the liberal framework, interfaces between the three theories were most prominent. In-depth insights showed that TES particularly referred to universal values that are built around the idea of a common humanity. Findings further indicated that the worldwide interconnection between humans is very much perceived to be based on unjust structures which need to be changed. In this context, Western supremacy and unequal distribution of power and resources worldwide were among the issues raised by TES. At the same time, TES think that GC is also influenced by rapid globalisation processes that require certain skills and competences. Overall, research results revealed a tendency to contradictions in TES’ viewpoints on GC. Finally, TES somewhat identify with GC and the great majority finds GC important for their self-image as future teachers. An engagement with different typologies of GC related to internationalisation processes and the inclusion of multiple perspectives of GC are recommended to raise awareness of heterogeneous perceptions and related contradictions. The influence of COVID-19 on perceptions of GC and aspects of rethinking internationalisation are topics that require future research.