Bin your butt : a survey-based study on cigarette butt pollution and consumers behaviour in Cyprus 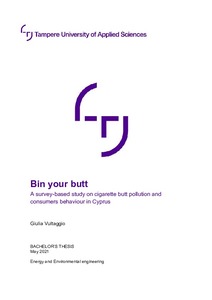 Vultaggio, Giulia
All rights reserved. This publication is copyrighted. You may download, display and print it for Your own personal use. Commercial use is prohibited.
Näytä kaikki kuvailutiedot
Julkaisun pysyvä osoite on
https://urn.fi/URN:NBN:fi:amk-202105057231

Every year 4.5 trillion cigarette butts are released in the environment, making them the most littered item in the world. Studies proved that cigarette butts contaminate ecosystems with nicotine, aromatic polycyclic hydrocarbons and heavy metals, in addition they pose a threat to aquatic life.

The results suggest that students, people under 30 and smokers are the groups less aware regarding the risks of cigarette butt pollution, but they are also the groups according to who Ballot Bins would be effective. The study concluded that the campaign is effective because it targets the right groups. The research also pointed out that according to the interviewees the best measure to further reduce cigarette butt pollution are awareness raising and stricter fines and regulations.